Why is that a big deal, you ask? Simple: The first generation of the Thunderbolt interface technology hums along at 10Gbps, more than double the 5Gbps that USB 3.0 is capable of. Thunderbolt 2 screams at a face-melting 20Gbps. Intel likes to boast that Thunderbolt 2’s firehose of bits and bytes is capable of both displaying a 4K resolution video on a monitor while simultaneously transferring a 4k video file to external storage with nary a hitch, though we’ve yet to test the claim. (Hey, the first motherboard was only just announced!) 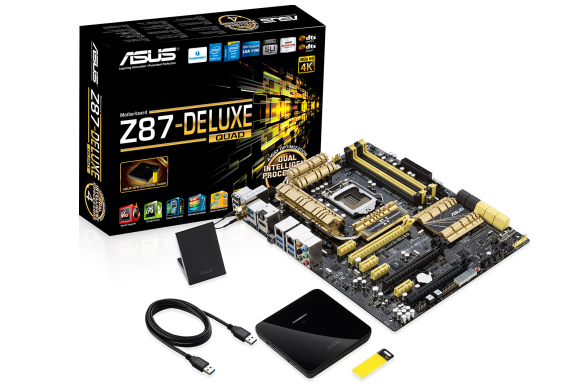 While shipments of Thunderbolt-equipped hardware technically surged over the past year, that’s only on a percentage basis; IDC reports that Thunderbolt can only be found on 0.6 percent of all storage devices sold. Intel’s tech plays second fiddle to USB 3.0 because those mind-blowing speeds come with an almost mind-blowing sticker price, which has also slowed adoption rates.

In fact, an Intel spokesperson has said that “Thunderbolt is targeted toward premium systems,” and the Asus Z87-Deluxe/Quad appears poised to keep the tradition going strong. In addition to the motherboard’s pair of bi-directional 20Gbps Thunderbolt 2 ports and support for Intel’s cutting-edge Haswell chips, here are the rest of the short spec list Asus released.