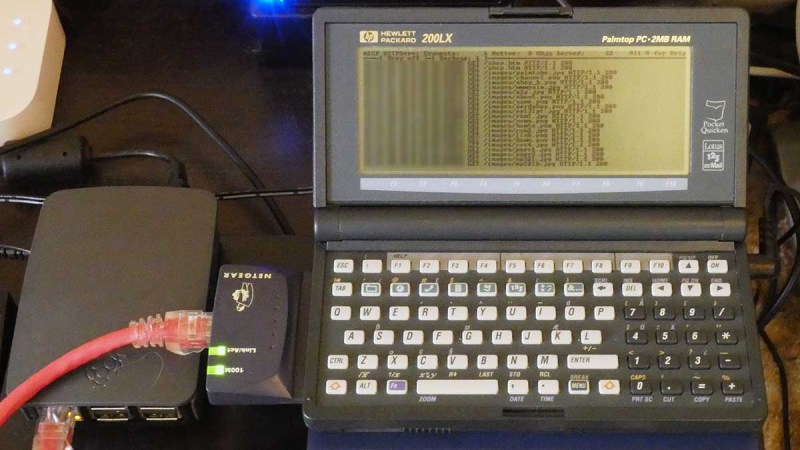 The HP-200LX palmtop was a fascinating machine for its time, and [Terrence Vergauwen] proves that its time is not yet over, given that one is responsible for serving up the website for Palmtop Tube, a website and YouTube channel dedicated to vintage palmtops.

All by itself a HP-200LX doesn’t have quite what it takes to act as a modern web server, but it doesn’t take much to provide the missing pieces. A PCMCIA network adapter provides an Ethernet connection, and a NAS contains the website content while networking and web server software run locally. Steady power comes from a wall adapter, but two rechargeable AA cells in the 200LX itself act as a mini-UPS, providing backup power in case of outages.

The HP-200LX was a breakthrough product that came just at the right time, preceding other true palm top computers like the IBM PC 110. In the early 90s, it was unimaginable that one could have a fully functional MS-DOS based machine in one’s pocket, let alone one that could last weeks on a couple of AA cells. It didn’t have some proprietary OS and weird ports, and that kind of functionality is part of why, roughly 30 years later, one is able to competently serve up web traffic.

A video overview of the machine and how it all works is in the video embedded below. And if you’re more interested in what an HP-200LX looks like on the inside? This video is all about taking apart and repairing a 200LX.