Ask any digital artist about their tools, and…

Ask any digital artist about their tools, and Wacom’s products inevitably come up: The company is famous for its pressure-sensitive drawing tablets and digital monitors. But when it comes to mobile technology, Wacom has been strangely wary of jumping into the fray, choosing instead to license its technology to third-party tablet computer makers. Even its iPad styluses were bereft of the pressure-sensitive technology the company is famous for. But all that is changing: On Monday, Wacom announced that it would be producing both a pressure-sensitive iPad stylus and its own custom tablet solution.

Welcome to the pressure-sensitive stylus party 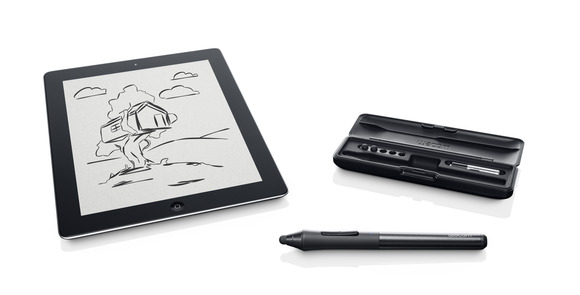 Wacom’s Intuos Creative Stylus joins the ranks of the Wacom Bamboo Stylus line, and is the company’s first pressure-sensitive iPad stylus. Given that the iPad doesn’t currently offer a pressure-sensitive display, the stylus incorporates both Bluetooth 4.0 technology and third-party app support to perform its wizardry; in this, it follows a similar path first set by fellow stylus-makers Adonit and Ten One Design.

The company boasts 2048 levels of pressure-sensitivity in compatible apps, along with palm-rejection technology. At launch, the Intuos stylus will support Wacom’s own Bamboo Paper app, along with SketchBook, ArtRage, ProCreate, ArtStudio, Inkist, and Flipink, with support coming soon for Adobe Ideas, Psykopaint, and Vision Object Notes. Design-wise, it combines Wacom’s traditional two-button interface and rubber grip with the 6mm rubber nib of the company’s original iPad model. It’s powered by a AAAA battery (Wacom brags that one will power the stylus for over 150 hours), and ships with a case, two spare nibs, and a spare battery.